Warning: get_browser(): browscap ini directive not set in /home/buyaustr/public_html/_koodoz/_config/config.php on line 42
 Australian made solar panels at the Tindo factory | Buy Australian Made Blog

Australian made solar panels at the Tindo factory 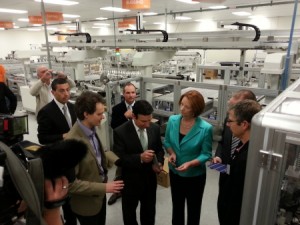 Tindo Solar, the Australian designer and manufacturer of photovoltaic solar panels has joined BuyAustralianMade to help raise awareness of their Australian made solar panels.

The Tindo solar panels are made in a purpose built factory which was officially opened late 2012 by the Prime Minister of Australia, the Honorable Julia Gillard. Also present were the SA Premier The Honorable Jay Weatherill, Federal Member for Makin Tony Zappia and SA Minister Tom Koutsantonis.

The Tindo solar panel is a world class, high quality and innovative panel that is new to the Australian public. Managing Director Mr. Adrian Ferraretto describes the key attributes of the AC module as;

1.    Enhanced electricity production – traditional DC panels need to wired in “strings” with the performance of each string reduced by the lowest performing panel in each string. Research evidence confirms at least 15% additional performance with an AC panel.
2.    Owners of an AC module system can observe real time the performance of each and every panel via the internet or smart phone
3.    The micro inverter has an industry first 25 year warranty

The Prime Minister stated that two myths had been put to rest;

1.    that Australia cannot create a new innovative high quality manufacturing business and compete with overseas products. Tindo Solar’s success shows that our future lies in a high skills, high wage, high innovation economy
2.    that the world class Tindo Solar manufacturing plant shows that something could be done in the face of climate change through installation of a solar system like the Tindo Karra 240 which assist the environment while creating new manufacturing jobs in Australia  .

The Prime Minister also acknowledged the impact of cheap imported products on a business like Tindo Solar and stated that “I am aware of the issue and the Australian Government is currently exploring options to remedy”.

Tindo’s Manager of People and Business says that “the interest received so far by the public across Australia confirms our believe that Australians want to select an Australian made solar module that has quality and performance embedded in each panel and at a price not a great deal different to imported panels.

Mr. Inwood said “that above all we are proud to be offering the Australian public a panel that is made by Australian’s”.

It is a natural fit that Tindo Solar has joined BuyAustralianMade to promote and increase awareness of their Australian made solar panels. To see the range of solar panels made by Tindo – CLICK HERE

This entry was posted on Wednesday, March 27th, 2013 at 3:56 am and is filed under BAM Members. You can follow any responses to this entry through the RSS feed. Both comments and pings are currently closed.